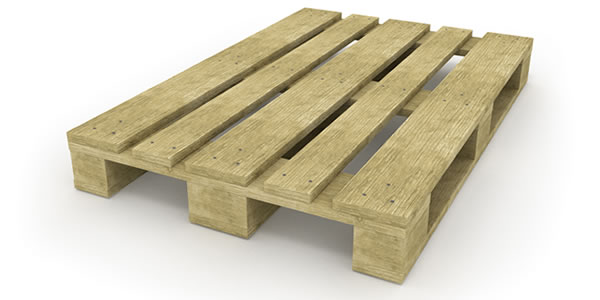 Posted at 14:01h in Blog by McS Arquitectos
0 Likes
Share

The development of the modern forklift in the 1920´s saw crates and barrels replaced by the introduction of wooden pallets to stack, store and move merchandise.  Combined with the forklift, pallets have had the greatest influence on material transportation since World War II.

Whilst no universally accepted standards for pallet dimensions exist, the most commonly used pallet in Europe measures 1200x800mm, weighing approximately 30kg and supports a load of between 1000 and 1400kg. They are generally made from pine wood, but plastic, metal and paper pallets also exist.  In an attempt to reduce transportation costs Ikea have opted for a paper-based alternative made from folded corrugated card that can support up to 750kg.

The negative effects of mass production and over consumption has persuaded people to recycle and inspired designers to seek inventive ways to reuse unwanted materials in the home. For those who wish to avoid the mass produced furniture from the high street stores in favour of an original piece of furniture that doesn´t require shelling out a small fortune, all that is required is a little inspiration and a lot of elbow grease.

Wooden pallets can often be found on building sites or stacked outside industrial warehouses and whilst the majority of them are kept to be reused or returned, you can usually pick up a few pallets for free if you ask nicely.  When working with pallets it is important to remember that they have often crossed many borders and therefore may have been treated with pesticides and fungicides to keep them from carrying potentially invasive species as passengers as they carry goods around the world.  Discarded wooden pallets should not be used for firewood or crafts unless it has been determined that the wood in these pallets has not been treated with wood preservatives, fungicides and/or pesticides.

Reclaimed wooden pallets have been used in many forms, from entire buildings, theatres and pavilions, through to sofas, chairs, beds, tables and shoe racks.

The Pallet House is the creation of Andreas Claus Schnetzer and Gregor Pils,  two students  from the University of Vienna, and as the name suggests, reuses pallets to form a modular, energy efficient  and affordable home, making it perfect for low-income housing. In 2008 the design won the 2008 GAUDI European Student Competition on Sustainable Architecture, and has since gone on to be displayed in several european cities including Venice, Vienna, and Grenoble.   800 pallets costing roughly €8 per pallet provide a 60m² house where two layers of pallets serve as the home’s walls, ceiling, and as a sunscreen to shade the structure and allow for ventilation. Then structural support, insulation, conduits and plumbing are sandwiched between the two layers of pallets.

Dutch firm  Most Architecture have created this temporary office from wooden pallets for Amsterdam company Brandbase.  Brandbase, a creative advertising company, wished to create a contemporary open space that was more than just a work area but also an informal space.  The elongated two-storey office uses 270 wooden pallets over 245m² that unites the whole space, covering the whole depth of the building in one single movement.

The industrial chic style coffee table seems to be the most popular piece of pallet furniture.  Here toughened glass is separated from the pallet with aluminium supports on the four corners and set upon swivel metal wheels.

Check out ScrapHacker.com for great ideas and how-to guides on creating your pallet sofa

When I was a studying architecture in Grenoble I opted for this cost efficient bed.  I picked up pallets from building sites that I had visited as part of my work experience, cleaned them and simply threw a mattress on top.  Great, until something crawled out of the woodwork and bit my forearm, leaving some nasty swelling, but nothing a bottle of local red couldn´t take the sting out of!

From two 80 x 80cm pallets I bought for 5 euros and some wheels from a local hardware store, I have just finished this coffee table for the waiting area of our office.  To avoid sanding down that surface again, lets not forget some coasters.  Labyrinth, a design studio in Barcelona, has scaled down the standard euro pallet to one tenth of its size, creating these stackable palette coasters that are exact miniatures of the industrial models, right down to their quality stamps.