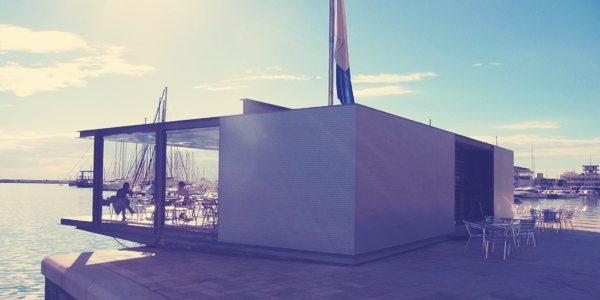 Posted at 13:36h in Blog by McS Arquitectos
0 Likes
Share

Ferry quay in the port of Alicante

“If you want to build a ship, don’t drum up people to collect wood and assign them tasks and work, but rather teach them of the endless immensity of the sea”

In 1998, one hundred years after the original building was erected, Alicante´s Royal Regatta Club was demolished.  The void it left was filled by a landing quay from which a small building hovers over the water and provides shade for passengers waiting to board the ferries to Tabarca, a small island ten miles off the coast.

This building, that now accommodates the Café Noray, occupies a part of the port which, throughout nearly two centuries, has signaled the point where the city ended and the sea wall changed to urban promenade.  The location provided the scene for the shift from fortified town to a summer recreational town when in 1890 the Sant Carles fort was replaced by a floating wooden structure, “Casa de Botes”, that would be home to Alicante´s Regatta Club, founded the previous year.

In October 1900 the club received the title Royal Regatta Club from King Alfonso XIII, who returned in 1909 to lay the first stone for a new building that would sit alongside the “Casa de Botes” to accommodate their increasing membership and growing social calendar.  The new clubhouse, which was designed by Claudio Durán Ventosa, was opened in 1911 and had a strong north African flavor with ceilings painted by Adelardo Padilla.  Games rooms were added to the rooftop terrace in 1915, by which time the original wooden clubhouse had been dismantled and sold for 1500 pesetas.

In the mid-20th century the clubhouse went through transformations that reflected architectural modernism until June 1998 when it moved to its current location at Muelle de Poniente.

In 1998 the port authority launched a competition to design a small passenger terminal that would occupy this important site where the Royal Regatta Club stood for more than 100 years.

The winning entry, by local architect Javier García-Solera, is a low horizontal permeable structure that allows an uninterrupted view of the port and has a large vertical flagpole inserted as a counterpoint that echoes the masts of the sailing boats and seems to almost pin this cantilevered box to dry land.

The simple elegance of this building allows its surroundings to present themselves in a natural manner.  The gentle rocking of the boats, the cooling sea breeze and the sound of the water lapping against the sea wall are not hindered by the physical presence of the building.  The minimal response of the Noray seems to turn its back effortlessly on the chaos of the city behind and when I step up onto the wooden deck I feel like I am setting sail and for a while I can disconnect, relax and enjoy.