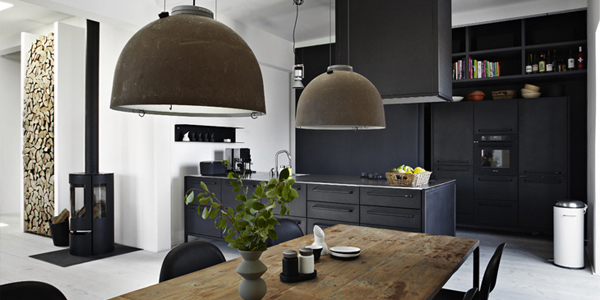 Posted at 12:59h in Blog by McS Arquitectos
0 Likes
Share

The modern kitchen is more than just a functional space for preparing food, often serving as the main family living space, a play area, informal dining room and home office all in a single day.  The change in perception of cooking, increasingly seen as a creative and sometimes social act instead of work, has led to open kitchens where the host can be in the midst of the action, not excluded in some pokey kitchen at the end of the hall whilst all the guests are having a great time in the dining room.  For the creative cooks the open kitchen becomes the stage for their cooking performance, whilst the eat-in style makes it easier for parents to supervise children.  The modern kitchen is the heart of the home.

The first systematic residential kitchen designs appeared in the 1840´s in an attempt to organise the work in the kitchen and where largely based on early ergonomics.  These ideas of efficiency in the kitchen led to the “work kitchen” and the notion of the kitchen work triangle where the three most common work sites, fridge, sink and stove, represent the three points of the triangle and are placed at an efficient distance apart with no obstructions or household traffic flowing through this area.  If you place the points of the triangle too far away from each other you waste a lot of steps while preparing a meal and if they are too close to each other you have a cramped kitchen without any space to work.

The work triangle was integrated into common kitchen forms that were produced in the 1950´s in an effort to reduce costs through standardization.

In many studio apartments, where space is restricted, a single-file kitchen is a common solution.  It places all the units along one wall and the work triangle degenerates to a line.  This layout is often found in open plan properties where the living and kitchen and dining spaces are combined into one larger space.

In small homes that have a separate kitchen, a double-file or galley kitchen has two rows of cabinets on opposite walls, one containing the stove and the sink, the other the fridge.  The galley kitchen preserves the work triangle, as does the L-shaped, U-shaped and G-shaped kitchen. Where the galley kitchen is purely a work kitchen, the other layouts allow for an island or peninsula.

Islands are a more recent development typically found in open kitchens where the stove and sometimes sink are placed to be accessible from all sides so that more than one person can cook at the same time and allows the cook to communicate with family or guests since they are no longer facing the wall.  The island worktop often doubles as a breakfast bar for serving buffet style meals and snacks.  It adds additional storage space for all those recycling bins and has the possibility of being mobile, allowing for flexibility in room arrangement.